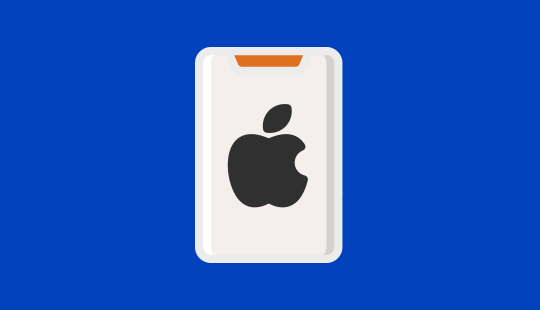 This is the most exciting time for all iPhone lovers. A shout out to all the Apple lovers as the company has recently made lots of exciting announcements at the annual worldwide developer’s conference 2019 (WWDC). From interesting updates to new products launch and much more, the company has offered a lot to both the app users and developers.

The company has launched new stuff including the pro display XDR, MacPro and iOS 13 with advanced features to change the mobile app industry completely. With the announcement, it has created a buzz in the market. According to the several reports, iOS 13 will offer a massive boost in the performance of iPhones by adding a wide range of features that are not just compatible with the latest operating system but as well as with iPhone 6s and all latest software. So, let us have a look at the new and advanced iOS 13 features.

Let us look deeper to explore the recently launched features of iOS 13 that will excite both the iPhone users and application developers.

The WWDC 2019 has surprised everyone by offering the highly demanded feature by iPhone users Dark Mode. According to Bloomberg’s report, iOS 3 has come up with a dark mode feature across the world. 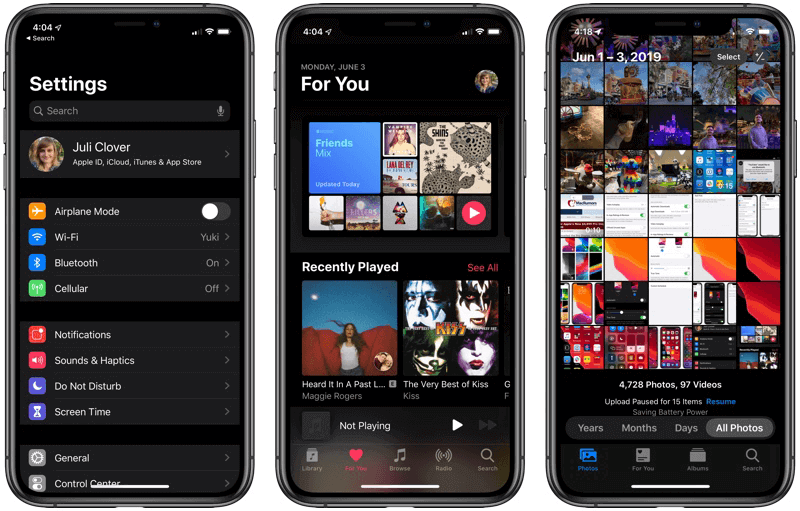 It does not only save the power of your iPhone but as well as it is very easy for your eyes. Now, users can turn on the dark mode as per their preference and can schedule it. Apart from it, Apple users can enjoy the darker themes or wallpapers and easier nighttime viewing.

In Apple iOS 13, Apple has introduced an advanced Siri version. The appearance and the features of Siri had been improved. Now, Apple users can accept or reject the call in a very personalized way as you want. Siri will send a personalized message to the caller if you reject the call explaining the reason why you have declined the call.

Read more: Costs of Building a Mobile App for iOS and Android

Siri’s voice has become more human and less robotic though the voice will come through software. To give more personalization to Indian users, the company will launch an Indian English voice.

iOS 13 offers photo editing tools to its users that do not only help them to edit photos but as well as video too. Here, photos are collecting in the library highlighting the best photos of you as well as hides the clutter. So, you can browse the pictures in an easier and better way. At the same time, you will be able to edit photos by using filters, adding effects and cab rotate the video as well. 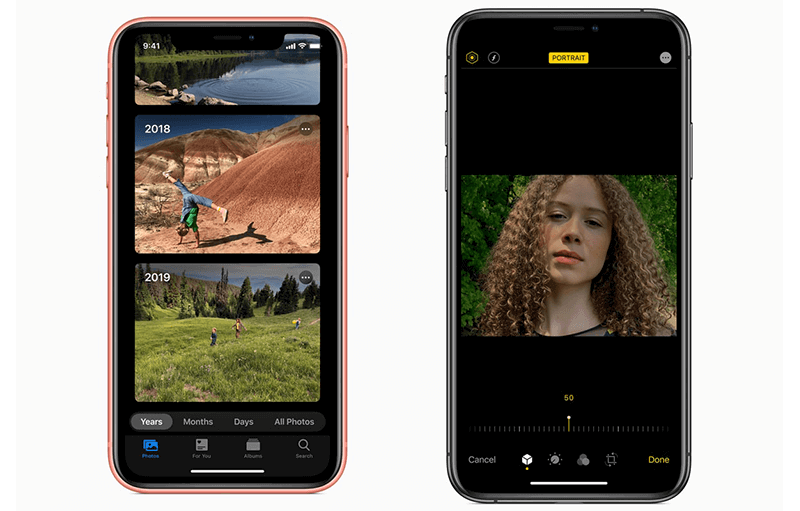 Apart from this, add the professional touch to your snaps using contrasts, highlighters, shadows, and brilliance. Not just that, the editor has also revamped with a more user-friendly interface that users will love to explore.

As you know that Apple’s map allows users to navigate the world within a few clicks and the best part about Apple maps is that you can navigate anything without affecting your privacy. With iOS 13, Apple is promising its customers a précised map experience.

Accurate addresses, as well as précised road coverage, is there in an improved map application. Not just that the 3D feature allows users to look around the place. However, currently the detailed map is just for a few cities but soon it will cover all region of the US.

Emojis have always been a topic of discussion among Apple users. They are complaining about it for a long time. Finally, Apple has come up with updated Emoji search features enabling users to search the Emoji of their choice. Like if you enter words like “fork” and “knife” in the search bar, it would not show the appropriate Emoji for the same because the name of Emoji was “dinner”. Now, Apple has resolved the issue and you can search Emojis of your choice with ease.

Read more: Which One is Best  – Swift vs. Flutter?

Apart from that, Apple has also added support for Emoji creation which is known as Memoji.

There is also great news for the Animoji fans. It has brought three new Emoji characters that people will love named a cow, a mouse, and an octopus. User can also create the Emoji of his or her choice and can use in on iPhone applications including message apps.

To add utility, Apple has included a bunch of new features to its health application. In this, the new health metrics have been added like how loud you can listen to music and female users can track their menstrual cycle. This also predicts the beginning and end of the cycle for the next three months. On top of that, this Apple App will provide you the summary of most vital data. The updated version of Apple health application is precise and will care for you regarding your health.

As of now, there is a confusing interface of the reminder application. Many users are complaining about it from years. Finally, the company had given a new breath to all its users.

Now, the updated reminder application has come up with the easy to use interface as well as smart filtering options. 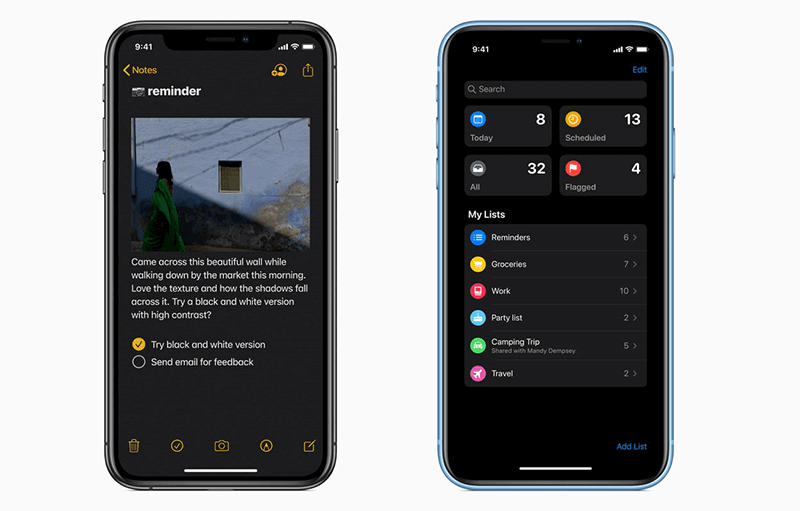 In addition to this, the app allows you to organize all the reminders in a better way according to their dates. You can also tag people in it. This reminder tagging is synced with messages so you can also get reminders during your conversations with your friends and family.

Apple has its prime focus to provide privacy to its users. The same goes for the latest Apple operating system. The privacy is the main concern of Apple therefore, users have to sign in with Apple before using it. The “sign in with Apple” feature allows its users to directly log onto the website using your face ID or touch ID.

Though users do not need to provide their personal information signing into your account sign-in is required to use the device.

iPhone application developers have so much to know!!!

Yes, with the launch of the latest operating system IOS 13, many developers want to try their hands on iPhone App Development. From Core ML 2 improved version to better functionality, enhanced data stability, the security of enterprise application development and enhanced data stability, everything offers iOS mobile app development solution to all developers. As the project catalyst had become public, chances are iPad apps will flow in Mac. This is a big iOS App Development solution for all developers. 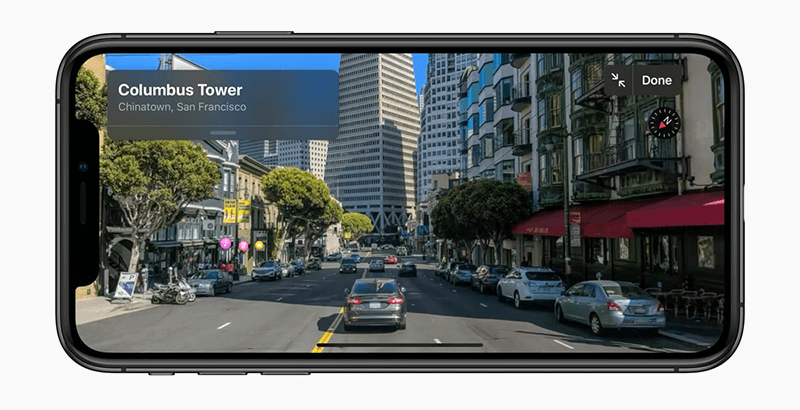 Now developers have a lot to experiment because it has opened a new era of iPhone App development. When it comes to iOS 13 vs Android Q, IOS 13 beats Android Q in several ways and the biggest one is the security/privacy.

At last, WWDC 2019 was not less than a gala for both iPhone lovers and iPhone application developers.