Google Released Angular 7: Let’s Get the New Features and Updates 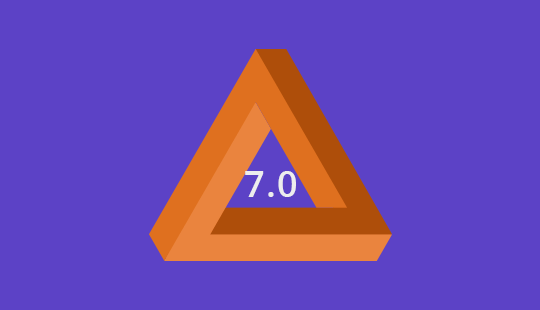 A JavaScript framework is a kind of buzzword these days: everyone keeps discussing these frameworks, and many developers are arguing about the best solution.

So, let’s get this Angular introduction started, shall we?

Why Do I Need a Framework?

If you’re not sure what a JavaScript (or client-side) framework is, that’s a technology providing us the right tools to build a web application while also defining how it should be designed and how the code should be organized.

Most JS frameworks these days are opinionated, meaning they have their own philosophy of how the web app should be built and you may need to spend some time to learn the core concepts. Other solutions, like Backbone, do not instruct developers on how they should craft the project, thus some people even call such technologies simply libraries, rather than frameworks.

Actually, JavaScript frameworks emerged not that long ago. I remember times where websites were built with poorly structured JS code (in many cases, powered by jQuery).

However, client-side UIs have become more and more complex, and JavaScript lost its reputation as a “toy” language. Modern websites rely heavily on JS and the need to properly organize (and test!) the code has arisen. Therefore, client-side frameworks have become popular and nowadays there is at least a dozen of them.

Angular Introduction: What Angular Is?

AngularJS used to be the “golden child” among JavaScript frameworks, as it was initially introduced by Google corporation in 2012. It was built with the Model-View-Controller concept in mind, though authors of the framework often called it “Model-View-*” or even “Model-View-Whatever”.

The framework, written in pure JavaScript, was intended to decouple an application’s logic from DOM manipulation, and aimed at dynamic page updates. Still, it wasn’t very intrusive: you could have only a part of the page controlled by AngularJS. This framework introduced many powerful features allowing the developer to create rich, single-page applications quite easily.

Specifically, an interesting concept of data binding was introduced that meant automatic updates of the view whenever the model (data) changed, and vice versa. On top of that, the idea of directives was presented, which allowed inventing your own HTML tags, brought to life by JavaScript. For example, you may write:

This is a custom tag that will be processed by AngularJS and turned to a full-fledged calendar as instructed by the underlying code. (Of course, your job would be to code the appropriate directive.)
Another quite important thing was Dependency Injection, which allowed application components to be wired together in a way that facilitated reusable and testable code. Of course, there’s much more to AngularJS, but we’re not going to discuss it thoroughly in this article.

AngularJS became popular very quickly and received a lot of traction. Still, its maintainers decided to take another step further and proceeded to develop a new version which was initially named Angular 2 (later, simply Angular without the “JS” part). It’s no coincidence the framework received a new name: actually, it was fully re-written and redesigned, while many concepts were reconsidered.

The first stable release of Angular 2 was published in 2016, and since then AngularJS started to lose its popularity in favor of a new version. One of the main features of Angular 2 was the ability to develop for multiple platforms: web, mobile, and native desktop (whereas AngularJS has no mobile support out of the box).

Then, to make things even more complex, by the end of 2016, Angular 4 was released. “So, where is version 3?”, you might wonder. I was asking the same question, as it appears that version 3 was never published at all! How could this happen? As explained in the official blog post, maintainers decided to stick with the semantic versioning since Angular 2.

Following this principle, changing the major version (for example, “2.x.x” becomes “3.x.x”) means that some breaking changes were introduced. The problem is that the Angular Router component was already on version 3. Therefore, to fix this misalignment it was decided to skip Angular 3 altogether. Luckily, the transition from Angular 2 to 4 was less painful than from AngularJS to Angular 2, though many developers were still quite confused about all this mess.

Angular 5 was released in November 2017. It is also backward compatible with prior Angular versions. Angular 6 should be released quite soon, hopefully giving us even more cool features and enhancements.

Angular Introduction: the Advantages of Angular

So, why Angular? Well, because it’s supported on various platforms (web, mobile, desktop native), it’s powerful, modern, has a nice ecosystem, and it’s just cool. Not convinced? Let me be a bit more eloquent then:

Read More: In-house developer VS Outsourcing: Which one is Better for Start-Ups!

So, we can say that Angular is not just a framework, but rather a platform that empowers developers to build applications for the web, mobile, and the desktop. You may learn more about its architecture in this guide.

I have to say that, unfortunately, Angular is quite a big and complex framework with its own philosophy, which can be challenging for newcomers to understand and get used to. Learning the framework’s concepts is not the only task, however; on top of this, you also have to be comfortable with a handful of additional technologies:

So, as you see, there are quite a lot of things to learn in order to start creating client-side web applications. But don’t be put off: there are numerous resources on the net that may help you learn all these tools and technologies. Of course, you’ll need some time to get a grasp of them, but as a result, you’ll get valuable experience and will be able to create complex apps with confidence.

One last thing worth mentioning is that sometimes using Angular for an app may be overkill. If you have a small or medium-sized project without any complex user interfaces and interactions, it may be a much better idea to stick with plain old JavaScript. Therefore, it’s very important to assess all the requirements, features of the new application, as well as take deadlines into consideration before making a decision on whether to use a JavaScript framework or not.

In this Angular introduction, we’ve discussed Angular, a client-side framework supporting multiple platforms. We’ve covered some of its features and concepts, and also have seen how it differs from AngularJS, the previous version of the framework.

Hopefully, you’ve now got a basic idea of what Angular is and in what cases it may come in handy!

If you would like to start learning this framework today, check out the SitePoint Angular tutorial series. And, of course, there are much additional learning materials on the site, so make sure to check them out too.

Android Studio 3.2 is Here: Let’s Dig into its Pivotal Features
How to Create a Successful Mobile Application?