Swift vs. Flutter. Which One is Best For The Next Generation? 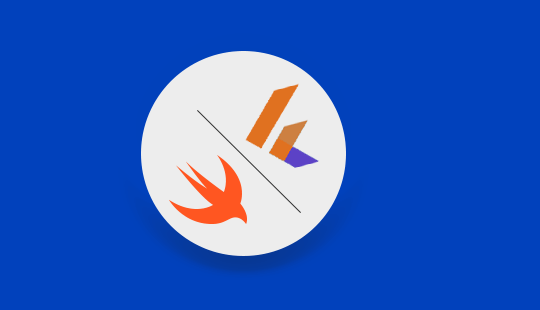 Home  »  Programming   »   Swift vs. Flutter. Which One is Best For The Next Generation?

Before we plunge into the depths of the topic, let us understand a bit about both Swift and Flutter.

Swift: Swift is a coding language that will enable you to create Native iOS Applications for MacOS and iPhones only.

Flutter: Flutter, on the other hand, is an SDK that helps create cross-platform, Mobile applications for iOS and Android.

How Enterprises Have to Choose Between Swift and Flutter?

Enterprises have to consider their interests and needs and do a little bit of market study to choose between Swift and Flutter. Only when they need to create iOS applications, they need to choose Swift which helps develop exciting apps for iOS only. For upstarts, it will be best recommended to try Flutter first, start demo applications and then make a tectonic move to Swift.

Creating these demo apps will help them become conversational with the language and its subtleties very clearly. Also, they can try Swift side by side if they intend to. And some native knowledge will be required as well.

Read more  :  How To Develop A mobile App With No Experience

Powered and driven by Google, Flutter is fast gaining currency in the marketplace as a perfect platform for cross-platform. But, a UI development framework, Flutter lags behind Swift in terms of native application features and functionalities including Maps, OpenGL, Video support and Accessibility support.  In addition, the cross-platform mobile app development tech stack has stabilized itself, if it isn’t still good enough to beat iOS’s official native coding script, Swift, in the marketplace. So it better to choose Swift over Flutter at the onset.

But again, as we understand, Google intends to replace Fuchsia with the Flutter framework to become the only single tech to develop an application for various platforms. This also points to the impact that it will have on the presence of Swift in the market.

In such a scenario, it is recommended to try out Swift, and make early inroads into the Native app market, while adopting Flutter in the backdrop. This way you’ll be better able to connect the present with the future.

Pros and Cons of Swift:

When it comes to Swift, the pros of developing iOS App on Swift are many: easy to read; simple to maintain; interoperability with Objective-C; improved and safe performance; statically-typed characteristic and robust; cross-device support, full-stack potential like full-stack Javascript development; automatic memory management guided by automatic reference counting; robust corporate support from Apple and IBM.

The drawbacks of Swift include lack of backward computability with previous language versions (fixed partially); speed issues (though newer versions have improved); immaturity and pain areas; a limited amount of “native” libraries and tools.

Pros and Cons of Flutter:

Let’s travel along and quickly take a look at the benefits of Flutter:

Flutter, a reactive cross-platform mobile development framework rolled out in 2017, is a Google UI framework for creating awesome native interfaces in iOS and Android in a quick time. Google boasts three predominant benefits that differentiate Flutter from the rest–fast development, Native performance, and flexible UI. The three main features have been the company’s USP for the platform.

Flutter, on the other hand, contains limited libraries meaning developers have to create these libraries, which is either cumbersome or tiresome; they cannot work with CI platforms such as Jenkins and Travis; offers limited TV support; higher development time & cost; consumes lots of resources.

Read more  : Objective C vs. Swift: Which is Better? (A Definitive Guide)

Future of Both Swift and Flutter:

Though Swift coding language is in its infancy, it has a lot of success stories to boast. Actually, Swift 4.0 has improved a lot from its previous versions. Swift 4.0 is characterized by ease of migration to Swift 4.0 updates, API improvements, updates to Swift Package Manager and additions, etc.

Swift has found application in Coursera, Linkedin, Twitter, Vimeo, Facebook, Pandora, and Uber is poised to join the bandwagon soon as popularity of Swift surges. Thus, as the rate of adoption grows, Swift can eventually replace Objective-C as the major scripting language for iOS development. For Android Development, Java and the new kid in the block Kotlin will be the future.

As for Flutter, the key component is that it paints everything on the screen rather than using native OEM widgets. This means there is no longer the ‘great gulf’ between designers and development and no shipping code frequently. This also means that the impeccable Flutter generated UI looks almost the same on all iOS and Android devices. It seems to have improved on viewing great on Samsung as well. A mobile app development startup would put its head down and build multiple Flutter apps to satisfy their adrenaline rush.

Well, we’ve been hearing that Flutter would allow creating apps for Fuchsia, Google’s future mobile or desktop OS. Therefore, if you are just starting out with Flutter, think of the possibilities if this turns out to be true. Even if the truth is otherwise, you’d be still creating highly functional mobile apps for both iOS and Android.

How To Reduce The Cost of On-Demand Mobile App Development?
WWDC 2019: Everything Apple Announced at Its Annual Developer Conference